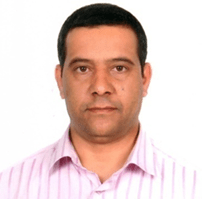 Amara Masrouhi is an Associate Professor of Structural Geology & Tectonics at Geo-resources Laboratory, Water research and technologies Centre of Borj Cedria (Tunisia) since February 2015. He is also under international cooperation contract between Tunisia and KSA and have a position of Associate Professor of Structural Geology in Faculty of Earth Sciences, King Abdulaziz University (KSA). Amara has been a visiting professor at CEREGE in Aix-Marseille University from 2011- to 2016 (one to three months/year). He explores tectonic processes in the Maghreb belts and the Arabian Nubian shield. Early work focused on salt tectonics and developing models for the construction of the salt structures in Tunisia. Since 2013 he has added a second research focus: tectonics modeling and deformation restoration.